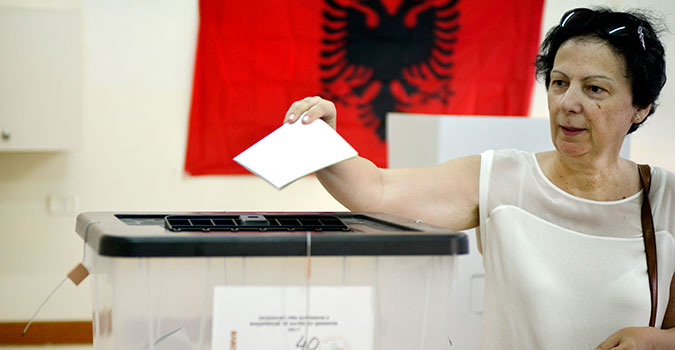 Albanian women’s participation and representation in the political decision-making remains limited and below international benchmarks. Women made up 29 per cent of the Parliament at the end of 2017, the highest ever in Albania. A significant milestone in increasing women’s representation in the Parliament over the years was made possible upon the inclusion of 30 per cent quota in amendments made to the Electoral Code in 2008 and other amendments in almost every other electoral year. However, this change in the Electoral Code is not fully respected.

At local level, women represent 14 per cent of the mayors and 35 per cent of the municipal council members. These changes took place thanks to 50 per cent quota system approved four months prior to 2015 local elections.

While women account roughly for half of the population, they are significantly underrepresented as voters, candidates and elected officials. This can greatly impact the quality of women’s life and their voice in public decision-making.

UN Women in Albania supports electoral processes that uphold women’s rights and initiatives that strengthen the role of public electoral oversight bodies. It is key to work in the future with political parties to improve their candidate recruitment and selection rules, in order to ensure fair and transparent processes. Partnerships with civil society and media are also at the core of our work to fight gender stereotypes and advocate for women’s fair access to political decision-making.

UN Women Albania is leading positive examples through the support provided to the Alliance of Women Parliamentarians, especially in their advocacy for 50 per cent gender quota. We also initiated and supported the establishment of Alliances of Women Councilors at the local level and their concrete strategies and workplans up to the establishment of the National Network of Alliances of Women Councilors. We backed these Alliances to push forward the gender equality agenda at the national and local level.

UN Women has been working to improve the legislative framework to ensure gender equality in elections and higher women representation. We have strengthened the capacities of public independent bodies for a more gender sensitive electoral management and reporting. We back women and first-time voters’ right to access to information for participation in elections. Other initiatives enhance the capacities of civil society, women and local actors to participate in public life and holding decision-makers accountable.