Synergy between institutions provides a better future for survivors of violence

The mechanism that manages cases of domestic violence in Kamza has been very effective since its revitalization, supporting 84 women and girls in one year.

Esmeralda, Luisita and Vjola are active young women helping other women to have a life of dignity and freedom. They represent some of the institutions that are part of the Referral Mechanism in the municipality of Kamza. This dedicated mechanism, like in every Albanian municipality, aims to protect and support survivors of domestic and gender-based violence.

Since January 2018, under the EU-UN Women regional programme on ending violence against women, “Implementing Norms, Changing Minds,” UN Women has supported the strengthening of the Referral Mechanism in Kamza municipality, which is one of the areas in the Tirana region with the highest reporting rates of violence against women, totaling 214 reports in 2018. Under the framework of the regional programme, the Human Rights in Democracy Center has provided training to all the actors involved in the Referral Mechanism. About 700 service providers have received training regarding their legal obligations to address cases of violence against women and the services available for women and girl survivors of violence. Municipal staff, the police and medical staff have all been part of the training, which has played a key role in changing the lives of women and girls experiencing abuse and violence. How are they doing it? Meet the team managing cases of gender-based violence in Kamza and learn some of their challenges. 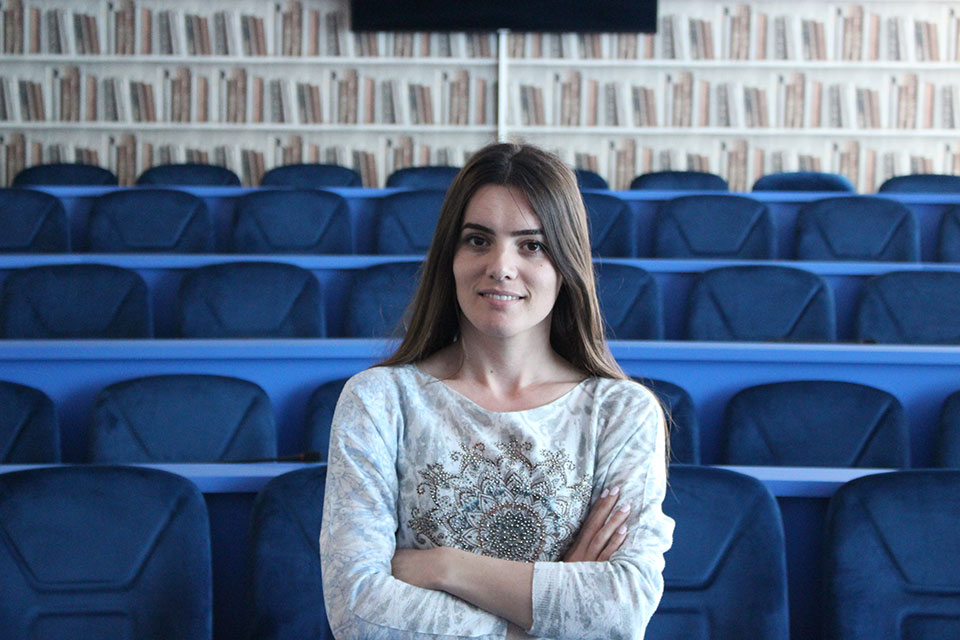 Besides organizing the monthly meetings of the Referral Mechanism, during which all cases of violence are addressed by local actors and institutions, Esmeralda also follows up on each case with the local institutions.

“To ensure that there is no overlapping, I coordinate all the institutions that are part of the Mechanism: the police, the health center, the shelter, the employment office, local NGOs, etc. My role is to set in motion and notify all the responsible institutions when they have not taken the necessary measures regarding specific cases,” said Ms. Troci.

She stressed that despite the ability of these institutions to cooperate and take responsibility, there is still room for improvement.

“I think that the Referral Mechanism should meet more often, and the collaboration between the institutions should be strengthened. There should be continuous training for all the actors involved. We have already received training regarding the recent changes in the domestic violence legislation, and we are more accountable in fulfilling our legal obligations.”

The Human Rights in Democracy Center, with the support of the EU-UN Women regional programme, has trained 32 municipal staff in Kamza municipality since 2018.

Esmeralda Troci underscored the need for a dedicated person in the municipality of Kamza to handle with priority the high number of cases of domestic violence reported.

“I wouldn’t have managed all the cases without the support of Human Rights in Democracy Center,” she said. 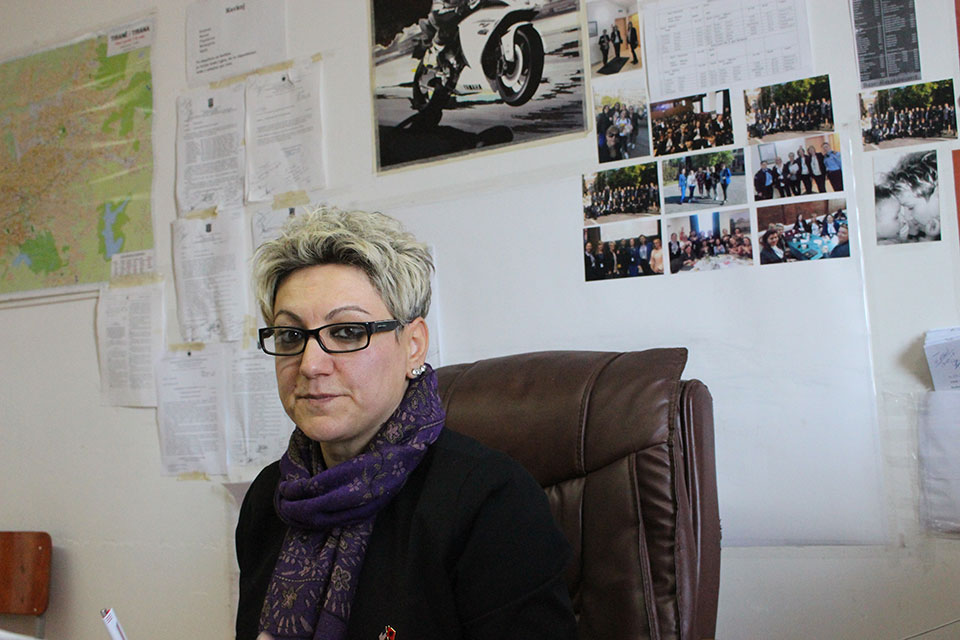 She is often on duty even during non-official hours. Luisita Shqypi, a Crime Police Officer at No. 5 Police Commissariat, is well known by many in the small municipality of Kamza. Her support is requested anytime and anywhere. Her phone might ring at 11 PM when she is at home, or she might be stopped on the street. Luisita and two of her other colleagues are officials dedicated to handling cases of violence against women and girls, including domestic violence.

Kamza Police Commissariat has the highest reporting rate of violence against women in the region of Tirana. This year, there have been 67 reports of gender-based violence.

“Cases of domestic violence are now a priority. We investigate if there is a case even when we have a suspicion. If a woman is not feeling safe at home, she is accommodated in a safe shelter. Now there is an immediate solution through the preliminary protection order of the police until the investigations are over,” said Luisita Shqypi.

She stated that the essential steps of attaining a protection order – which involve a psychological evaluation, a forensic decision and medical examination – can now be completed within a few hours. At least 50 police officers in Kamza have received on-the-job training on how to handle cases of violence against women and effectively cooperate with other institutions that are part of the Referral Mechanism.

“I evaluate the charges and complete all the necessary legal steps. I must be sure that the survivor of violence is safe. For me, it is highly important to communicate both with the victim and the perpetrator,” Luisita Shqypi added.

As someone who often works in the field and meets with citizens of Kamza, Officer Shqypi expressed the need to increase awareness on the issue among the most impoverished communities in rural areas and among those who are vulnerable. 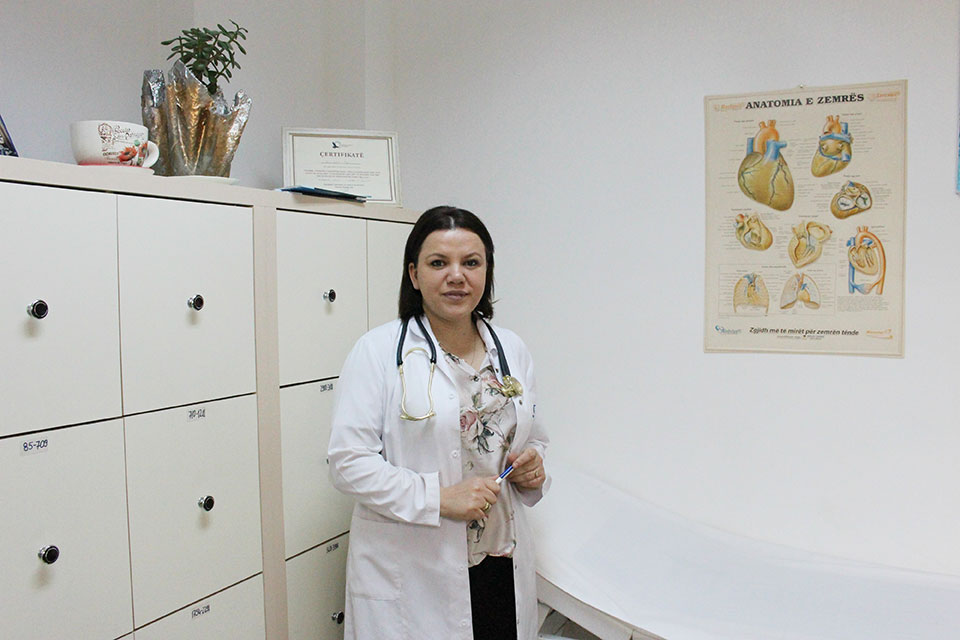 Dr. Vjola Ferra has been working for two years as the Director of the Kamza Health Center, which serves around 100,000 inhabitants. It is crucial for women and girl survivors of violence to seek medical reports from this health center as proof of incurred violence in order to obtain a protection order.

The Human Rights in Democracy Center has been training medical staff in Kamza municipality on topics such as identifying all forms of violence against women, how to fill in medical reports for survivors of violence and the existing services that are available for them. So far, 154 medical staff have been trained. They were also informed on their obligations as foreseen by the Law "On Measures Against Violence in Family Relations" and its latest amendments.

“Now, after the legal changes, you can get a protection order faster, within 24 hours, preventing the escalation of violence and potential crimes. Also, as a result of the changes in the law, women and the community have become more aware and have the courage to ask for a protection order or undergo a medical examination,” said Dr. Ferra.

Dr. Ferra and her medical staff suggested the need for the services of a psychologist.

“Based on my daily work and the cooperation we have with the municipality and the police, I think that it is very important to have a psychologist on our team. He or she can play a crucial role in advising and treating cases in a sensible manner,” said Dr. Ferra.