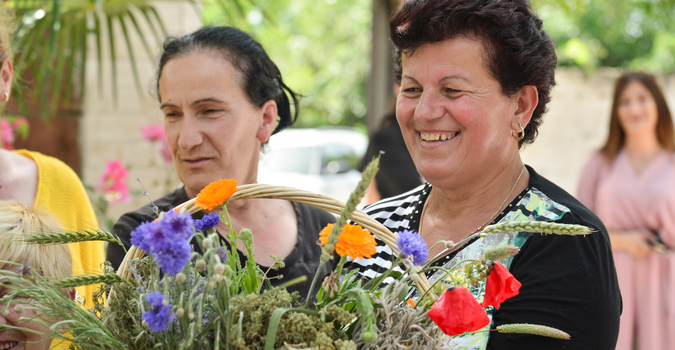 In November 2019, Albania was hit by a 6.3 magnitude earthquake in the center west of the country. As a result of the disaster 51 people lost their lives and more than 202 thousand were affected. The earthquake, the strongest to hit the country in the last three decades, left extensive damage in 11 municipalities, including the two most populous, urbanized and developed municipalities (Tirana and Durres).

Past experiences show that women and girls are differently and often disproportionally affected by disasters and crisis and have different and uneven levels of resilience and capacity to recover. According to the Post Disaster Needs Assessment (PDNA), following the 2019 earthquake, women and girls were disproportionately impacted by the earthquake as they were pushed further towards traditional roles and activities.

Moreover, women and girls in these communities are now faced with the impact of COVID 19 pandemic, which has further affected rural women, who face increased risks of losing their subsistence agriculture production. The most affected ones are: single mothers or women heads of households who are at risk of losing their homes; women victims of domestic and/or intimate partner violence, and other groups with an increased vulnerability such as women and men with disabilities, LGBTI persons, elderly persons, and Roma and Egyptian women and men.

UN Women in Albania has been working through the gender sensitive post-earthquake recovery and reconstruction project to support and empower women in the eleven earthquake affected municipalities: Shijak, Durres, Kruja, Tirana, Kamza, Kavaja, Vora, Rrogozhina and Kurbin, Mirdita and Lezha – in both rural and urban areas.

Our work focuses on reducing gender inequalities and the vulnerability of these women, including by assisting national and local institutions to prepare and develop disaster risk reduction plans that take into account the specific needs of women and girls.

In addition, we support women participation in recovery processes and the Women’s Small Businesses initiative to support and empower women in the eleven affected municipalities. They have benefited from employment opportunities and market access through the development of value chains. This has led to increased family incomes. The project is assisting with property legal aid to register new houses and apartments in the name of both spouses, based on the Albanian legislation.

With our work we provide legal aid and psychological support to women and girls in these communities, and raise their awareness and understanding on gender-based violence. We use “Empowerment through Self-Defence” (ESD) to build physical, psychological and emotional safety of women and girls, and a greater sense of self-confidence in challenging gender stereotypes. Through ESD training of teachers and educators from schools located in the earthquake damaged areas, we help prevent violence and reduce bullying in schools.

In addition, UN Women in Albania is working with local actors and service providers such as police, health and judicial sector to increase their capacities in responding to survivors of violence in crisis situations.

This intervention is financially supported by the Government of Sweden, through the UN Albania SDG Acceleration Fund. Denmark, Finland, Netherlands, Norway, Poland, and the United Kingdom are also supporting the Albanian Government post-earthquake recovery efforts.