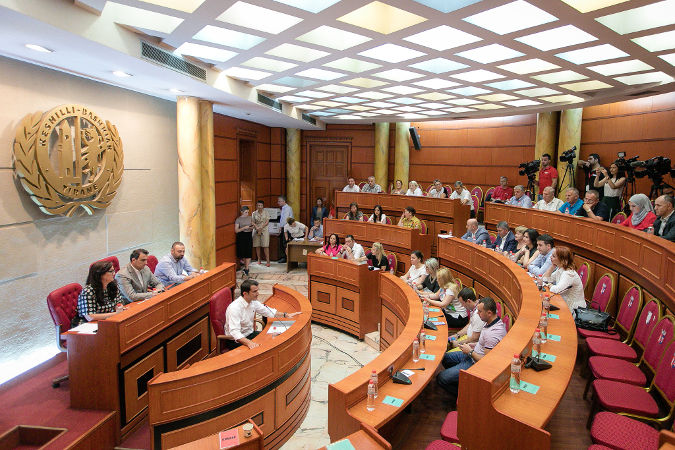 The Municipal Council Meeting in Tirana, when approving the plan. Photo credit: Municipality of Tirana

“If Tirana had a gender, it would be a woman” – proclaimed Erion Veliaj, the Mayor of Tirana, when he addressed the municipal council after it approved the city’s first Gender Equality Action Plan. The council, with 51 per cent women representation, unanimously agreed to give the green light to the Gender Equality Action Plan to fully implement the principles of gender equality in their policies, their organization and their practices.

One year after seven municipalities in Albania formally confirmed their commitment to gender equality by signing the European Charter for Equality of Women and Men in Local Life, five of them, supported by UN Women, have prepared Gender Equality Action Plans. The municipal councils of Tirana, Elbasan and Durres have already approved their Action Plans.

The drafting and adoption of these Plans are considered crucial steps in realizing the Charter and its commitments.

This means that these cities now have a vision where women and men, girls and boys, despite of their age, special needs, ethnic and social group, religious, sexual orientation or gender identity, are treated according to the principles of gender equality in all walks of life.

“The Plan will have a direct impact on the lives of women and men living in the capital. In our daily life, in practice, women and men, boys and girls, are still far from equal. That is why in the Gender Equality Action Plan we propose to address some of the most important issues regarding gender inequalities and discrimination,” said Anisa Ruseti – Director of Social Services at the Municipality of Tirana.

UN Women has previously supported the local governments in Albania in advancing women’s rights through initiatives aimed at mainstreaming gender equality into policy, planning, and budgeting and facilitated the signing of the European Charter in all seven municipalities with the support of the Austrian Development Agency.

UN Women provided technical assistance to five municipalities in preparing their Gender Equality Action Plans in line with the Council of European Municipalities and Regions (CEMR) regulations and EU standards, with clear structure, priorities, responsibilities and budgets that respond to the needs of women, men, girls and boys equally.

“We have also facilitated consultations with local citizens, the Municipal Council, and the Women’s Alliance,” said Monika Kocaqi, UN Women expert. She explains that some of the key objectives of these plans are to increase women’s and young girls’ participation in decision making, reduce gender stereotypes in education; ensure equal access of women and men to health services, social protection and inclusion, housing, cultural and social activities, make public spaces safe, free from sexual harassment and violence; advance gender equality in employment among others.

Counsellor praised the plans for being inclusive, having clear visions and realistic and specific objectives. Many have participated in consultations about the plans, including local government units and the civil society.

“Unlike any other strategy or action plan existing in municipalities, the Gender Action Plans contain details regarding the time-frame, indicators to measure progress, as well as financial resources needed to implement each planned activity,” explained Ms. Kocaqi.

The Gender Equality Action Plans are planned to be implemented within the next 3 years (2018-2020) and must be revised every year.

“We are aware that addressing inequalities and discrimination is a long process and will require the attention of the local government for many years to come. The chances are this process will be replicated,” said Ms. Ruseti.

The adoption of these plans will serve as the basis for monitoring the implementation of national and EU gender equality policies, as well as a tool for municipal resource mobilization for gender equality in the future.