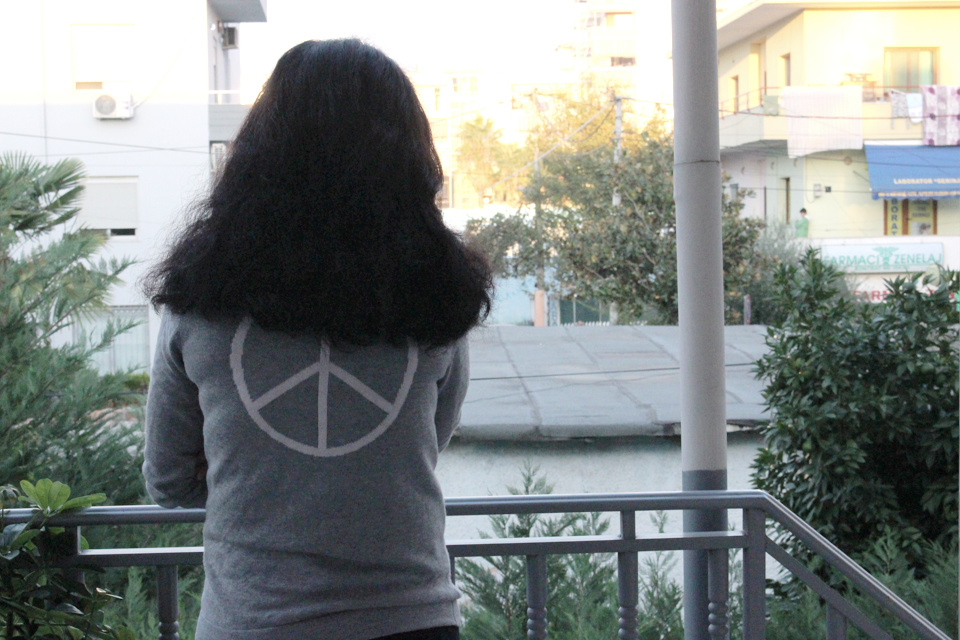 Flora Leka* had an arranged marriage at the age of 17. She dropped out of school and lived with her violent husband and father of her four children for more than 15 years.

“Violence started at the beginning of our marriage, for no specific reason. I will not forget when he hit me in the middle of a crowded street until the day I die. I felt so ashamed,” confessed Leka.
She said that her husband would complain about household chores even though she had a full-time job while also taking care of the house and their children. He almost never worked and had taken up drinking. Even though she never opposed him and accepted the burden of paid and unpaid work at home, the violence never stopped, even when she was pregnant. At times she stayed in bed for weeks.

But when he became aggressive with their children, Leka could no longer endure. With the help of her siblings, she reported her husband to the police commissariat in the outskirts of Tirana, the capital of Albania, and never looked back. Her separation process went smoothly with the support of the Human Rights in Democracy Center (HRDC), a civil society organization partnering with UN Women under the regional programme on ending violence against women “Implementing Norms, Changing Minds,” funded by the European Union.

“The organization has been with me every step of the way, helping me benefit from economic aid and rental bonus,” says Leka. During 2019, HRDC supported 54 women and girls living in Kamza city, 10 km from the capital, with free legal counseling and representation in court.

Albania’s legal framework for addressing violence against women and girls has undergone significant changes over the past two years. The most important changes were made in 2018 to the Law on Measures against Violence in Family Relations.

“The legislative changes have impacted the work of local structures in terms of monitoring and enforcing court decisions. An important step is the prohibition of the reconciliation procedure in court – which is also banned by the Istanbul Convention,” said Aferdita Prroni, Executive Director of HRDC.

In the framework of its collaboration with UN Women, HRDC and the Shelter for Abused Women and Girls have been increasing the capacities of service providers for women survivors of violence since January 2018. They played a key role in informing over 200 service providers on their new responsibilities under the revised law.

Police officers were trained on their new obligations, such as carrying out risk assessments immediately after identification, reporting domestic violence cases and issuing preliminary emergency protection orders, which enable the immediate removal of perpetrators before a judge has issued a protection order. “The risk assessment and the preliminary protection order issued from police structures is an important step forward for women exposed to domestic violence. It could be life saving for women,” highlighted Ms. Prroni.

She also noted that that there is strong coordination between the responsible authorities and civil society organizations providing support to survivors of violence. HRDC is actively engaged in the Referral Mechanism against Domestic Violence in two municipalities of the country, which aims to protect and support survivors of domestic and gender-based violence.

Since 2018, the Monitoring Network Against Gender-Based Violence, a group of 48 organizations, established with UN Women support and led by the Center for Legal Civic Initiatives (CLCI), has been actively engaged in lobbying, advocacy and monitoring the legal and policy framework on ending violence against women in Albania. They provided extensive recommendations during consultations for changes to the Law on Measures against Violence in Family Relations, Law on Social Housing and Law on Free Legal Aid, several of which were accepted.

Still, despite having a legal framework largely aligned with international standards, implementation continues to be a challenge. “Establishing the referral mechanism against domestic violence in all municipalities of the country and strengthening the effectiveness of existing referral mechanisms is very important in implementing the legal changes,” said Aurela Bozo, Executive Director of the Centre for Civic Legal Initiatives.

She added that while important work has been carried out to strengthen the capacities of police structures and other responsible institutions, “the risk assessment, risk management and preliminary protection orders have yet to become a nationwide well-established practice.”

In this regard, both organizations highlight that much more should be done regarding women survivors’ access to services and compensation. “Enrolling survivors of violence in support services is an important element in improving their socio-economic situation. The services available for this category are limited and still do not fully meet their needs,” stated Ms. Prroni.

Ms. Bozo also emphasized the need for a broader legal framework on violence against women and girls, inclusive of all forms of violence, not just domestic violence.

For Ms. Prroni, another critical point remains the lack of specialized social and rehabilitation centers for survivors and perpetrators. “Services and programmes are indispensable and should be established from local government according to the legislative amendments,” she concluded.

Although there is much more to be done, Flora Leka says that she feels more relaxed and safer now. “I feel like my life has been enriched.”

Related News
11/04/2022
In the words of Stela Tanellari: “Employment is essential for ensuring the successful reintegration of women survivors of violence into society”
10/12/2019
UN Women brings to Albanian audience Austrian experience in addressing the needs of women survivors of violence
18/11/2019
I am Generation Equality: Fatmira Dajlani, child marriage survivor and activist
24/05/2019
New Survey reveals violence against women still wide spread in Albania despite progress
22/05/2019
Violence against women and sexual harassment in urban spaces in Albania - Lack of reporting and information
END_OF_DOCUMENT_TOKEN_TO_BE_REPLACED