A dialogue with the Media, rural women’s discussion, an influencer’s social media campaign and gender-sensitive trainings were organized around the country on the 8th of March.

On International Women’s Day, young men and women in Albania switched their traditional gender roles! Through the use of irony, seven influential figures from various walks of life helped raise awareness and put a spotlight on the issues faced by women and girls every day, such as living under the weight of patriarchal norms and related phenomena such as domestic abuse, sexual harassment, unpaid work, gender stereotypes, etc.

Under the hashtag #changingroles seven influencers, among whom actors, journalists, comedians and bloggers, posted video messages on their Instagram accounts reaching close to 200,000 views. The messages received a great deal of public attention on the 8th of March, as reflected in the numerous positive comments, for shining a light on issues such as gender inequality and discrimination, through the use of role reversal and sarcasm. This campaign was part of the UN Joint Programme on Ending Violence Against Women in Albania funded by the Swedish Government. 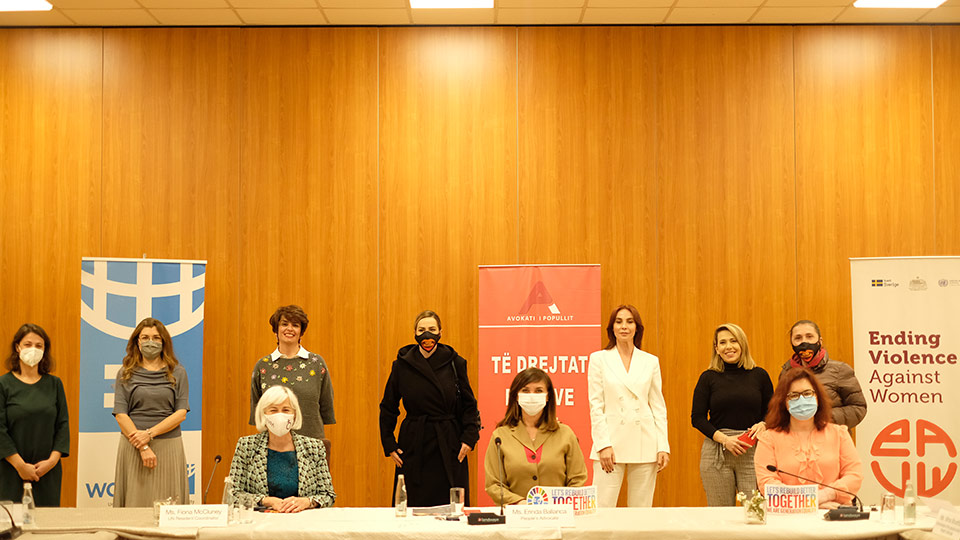 “The Media, Freedom of Speech and Women's Rights” was the topic discussed by representatives from the People's Advocate, the Audiovisual Media Authority and various media organizations. On International Women’s Day, the participants in the event discussed on how to better achieve respect for human rights by and in the media, and the role institutions and journalists’ associations can play in this regard.

UN Resident Coordinator in Albania, Fiona McCluney, highlighted that it is the view of the UN agencies that the media are a key ‘entry point’ for promoting women’s rights and preventing violence against women and girls in the long term. “For this reason, we need to increase collaboration with media as a significant tool for positive portrayal of men and women in society and driving away from practices that reinforce violence against women and girls”, she noted in her statement.

The participants discussed the role of the Audiovisual Media Authority in monitoring cases of violations of women’s rights with a special focus, ahead of the approaching general elections in Albania, on the need to play a key role in stopping sexist attitudes towards women candidates during the electoral campaign.

“I think that the Albanian media need to focus more on the perpetrators, rather than victims. Besides, the personal details of women victims of violence that are often reported in the media can lead to their identification and have often had consequences both for their lives and their families,” stated the People’s Advocate, Erinda Ballanca.

Journalists also took the floor in the meeting, with Anila Hoxha highlighting that the role of the media has been robust, however, there have been occasions when personal data have been revealed. “Whether this can be fixed through training or by bringing pressure to bear on the newsrooms so that the journalist is not asked to publish details, which is unethical... This is not just a job for the media but a job for all of us.”

“Media can really contribute to the stereotypes of men and women, but I want media to break these stereotypes and promote change. When we consume media, we need to ask ourselves: who decides what we see? Which issues are important? How are women and men featured in texts, photos and movies?”, said Elsa Hastad, Swedish Ambassador to Albania highlighting Sweden’s long history of supporting gender equality in the country.

In addition, the participants suggested the need to revise of the Code of Ethics for Journalists to address issues such as gender sensitivity and violence against women and girls in reporting, as well as to help institutionalize the relationship between editors/newsrooms and regulatory bodies.

This event was organized as part of the UN Joint Programme on Ending Violence Against Women in Albania, with the support of the Government of Sweden. 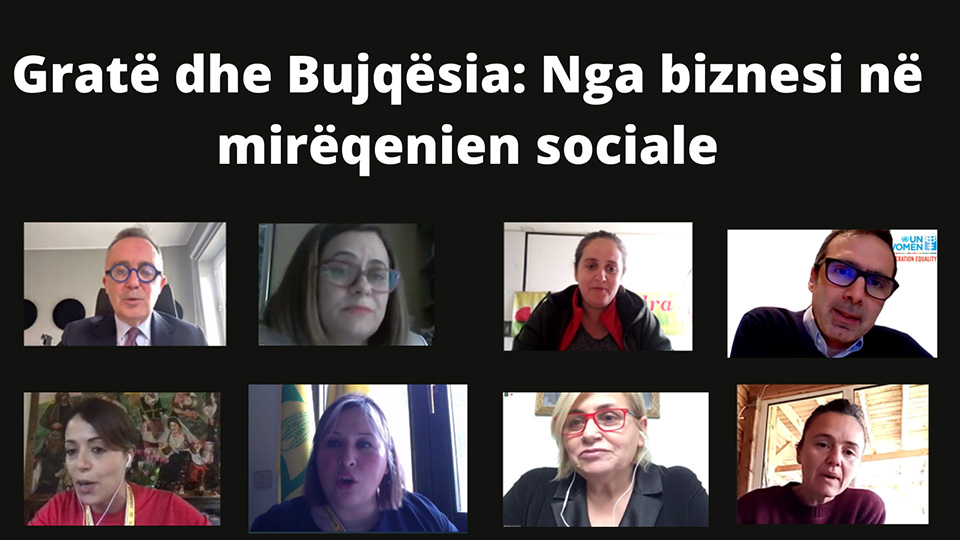 A wealth of ideas and experience was shared in a meeting of rural entrepreneurs from Albania and Italy on the empowerment and leadership of women in agriculture.

The meeting was organized in collaboration with the Italian Embassy to Albania and Coldiretti Donne Impresa, the largest organization of agricultural entrepreneurs in Italy, on the occasion of International Women’s Day.

Entrepreneurs from Albania and Italy shared their experiences of working in agriculture, as well as the challenges they face and the benefits they bring to the communities where they operate. They shared their insights on the future of agriculture businesses and new opportunities arising in both countries. 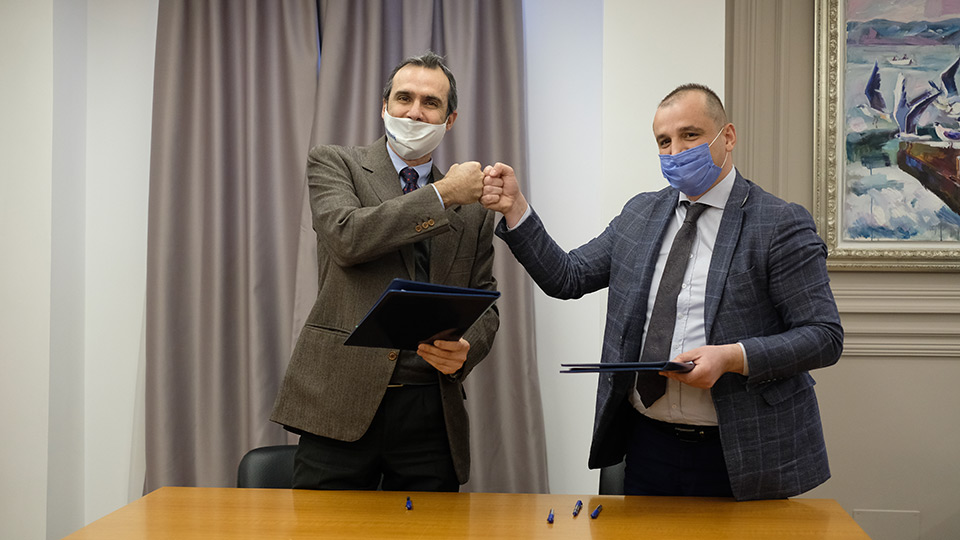 UN Women and the Albanian Supreme State Audit signed a cooperation agreement for the advancement of the implementation of gender equality commitments and monitoring of gender responsive budgeting.

The UN Women Representative in Albania, Michele Ribotta, and the Head of the Supreme State Audit, Arben Shehu, signed the newly established cooperation on the occasion of International Women’s Day. UN Women commits to support the Albanian Supreme State Audit Institution by offering capacity development to its professionals on how to apply a gender perspective in monitoring and auditing activities; providing technical and expert support in the process of developing a Gender Audit methodology and facilitating cooperation and exchange of information with the Parliament.

The signing was followed by a first training session with Supreme State Audit staff which focused on aspects of gender equality legislation and gender-responsive budgeting in Albania, supported by UN Women since 2012.

These events were organised in the framework of the regional project “Transformative Financing for Gender Equality towards more Transparent, Inclusive and Accountable Governance in the Western Balkans”, financially supported by the Swedish International Development Cooperation Agency (Sida).

A number of further smaller-scale activities, trainings and awareness-raising events were organized by different partner organizations in the framework of the EU-UN Women regional programme aiming at ending gender-based discrimination and violence against women in the Western Balkans and Turkey. At the same time, the International Women’s Day was also marked in various municipalities across the country where UN Women is supporting the Referral Mechanisms against Domestic Violence.

Related News
17/06/2022
The Broadcasting Code for Audio-Visual Media in Albania Amended to Promote Gender Equality and Non-Discrimination in the Media
13/10/2017
Across the Western Balkans, rural women are influencing local budgets and shaping progress
11/08/2022
Youth Activists in Albania Take the Lead on Climate Action for Gender Equality
28/07/2022
The ambitious project of Arjeta Puca supporting women’s employment in male dominated industries
13/06/2022
Youth Activists in Albania Develop a First Call to Action on Gender-Responsive Solutions to Climate Change
END_OF_DOCUMENT_TOKEN_TO_BE_REPLACED