In the words of Fabiola Laco Egro: “Women need to take part and to voice their priorities in the budgeting process” 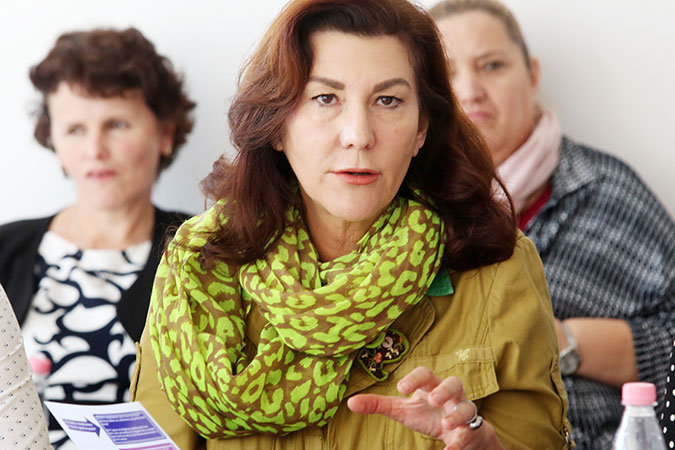 Fabiola Laço Egro. Photo:Agim Dobi
Fabiola Laço Egro is a civil society activist and the Executive Director of “Today for the Future” Community Development Center. Here, she explains how she led a pilot approach to increase women’s participation and their role in the participatory budgeting process of the Municipality of Tirana in Albania, supported by UN Women. This project was part of the UN joint programme "Leave no one behind" funded by the Swiss Government.

“Our ambitious challenge was to increase the participation of women in the participatory budgeting process and the quality of discussion.  I decided to be fully involved in open discussions as a woman to women in a simple and direct three-step process entitled, “Take part, speak up, decide!” and invited municipal representatives to partake. The approach was simple: working with the municipal budget, the same as with the family budget and everyone was deeply focused on solving problems and finding the best match. It was then that everything was flowing in the right direction.

At the local governance level, the participatory budgeting has become a key procedure in the municipal budget planning process. Due to social, economic disparities and gender inequalities, mainly in rural and suburban areas, women’s participation in budget and priority planning remains low. The most vulnerable and excluded women are completely missed out, also due to the lack of  inclusive culture and gender consideration in the local governance process. Being mothers and in charge of caring for all family members and chores, women’s voice in prioritizing the municipal budget in any area of investments and services is vital.

“Today for the Future” in partnership with UN Women empowered and activated 281 women in 10 administrative units of Tirana to take part and voice their concerns in municipal budget planning. Supported by the network of local organizations and women activists, they learned about budget planning in a simple and friendly way and how to translate their needs into joint community priorities.

They also engaged other women to be active, which boosted to 983 the number of women and girls who, for the first time, could participate and speak up about their priorities actively. This was the first-time women represented 49% of participants in the ten public hearings organized in their administrative units during 2018. They represented all ages, different economic and educational backgrounds, from rural and urban areas, including marginalized, migratory, ethnic groups and women with special needs. More than 40 women were speakers from women’s groups.

Investments in education and health, creation of safe public spaces, ensuring transport and improvement of social services were the core priorities voiced by women to their municipal representatives.  During workshops with local government units, both groups of women and public servants were mentored to discuss, prioritize, and to plan how the budget can respond to the community needs.

Following large-scale awareness raising and promotion through the media, social networks, activists and supporters, these women recorded the achievement of having 69% of their priorities approved in the 2019 municipal budget.  This included investments in road infrastructure, green space and lighting space, water and waste management and education.

It is amazing how women were able, not only to translate needs into priorities but also with their accurate and careful approach, they were able to rank and to match each priority with budget constraints and challenges. Being together, speaking up in town halls, it brings the echo of women's power.

Advancement of gender equality and empowerment of women in all areas of life are strongly bonded to the wellbeing of their communities. Women’s equal participation and voice in participatory budgeting processes are essential in local governance for ensuring that municipal services and budget planning respond to the real community needs and contribute to the improvement of coexistence and living standards in the society.”